Here’s a list of projects we accomplished during the Summer of 2013 Summer Hybrid program in Lansing.

Our Group was tasked with coming up with an “Avatar” or pictoral representation of who we were as well as a group name.  We chose “Half ‘N Half” because half of us hailed from Michigan and half of us from elsewhere in the U.S. 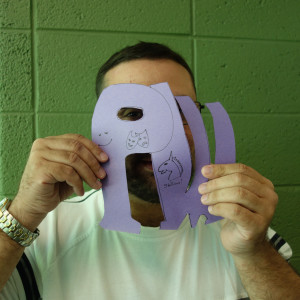 This project we were tasked with creating a mask that represents who we are as a person.  To me, it represents the adage of “A Picture is worth a thousand words.”  I made my mask into the letters “P” and “W” which represents Prairie Wind, the school I currently work at.

We were asked to predict where a ball would land if dropped from the same height at different rates of speed: Standing, walking, and running.  We were then tasked with going out and trying it out.  Then we were asked to try a different version of the activity where one ball was dropped and another slightly tossed to see which would land first.  The results were that the ball would land beside us regardless of speed and that both balls would land simultaneously regardless of trajectory within the parameters given.

Our group was assigned two chapters from Daniel Willingham’s book “Why Don’t Students Like School?”  We remade the first Chapter and did the second chapter using Powtoons. 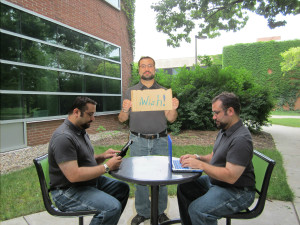 Haves vs. Have Nots

In this project we were tasked with taking our picture three times and attaching them to the same photograph to form an image that makes a statement.  The topic I chose was “Haves vs. Have Nots” in which I depict myself as being connected in two separate ways and then holding a ratty cardboard sign saying “iWish.”  It was meant to depict the varying degrees of connectivity among the people we teach. 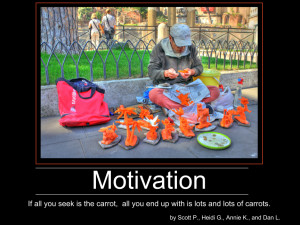 For this project, we were placed in groups and assigned to make a Demotivational Poster based upon a video we were assigned to watch and discuss as a group.  Our poster’s topic was Motivation and the caption was “If all you seek is the carrot, all you end up with is lots and lots of carrots.”  It was meant to depict that if you only seek a reward for whatever you set out to do, eventually there will be no motivation for the reward because the reward will lose meaning.

Each group was assigned two days in which each group member had to lead the class through one short technology tip per person each day assigned.  For my two days I chose the following tech tips:

1.  Spaces – Mac program that is built into the Mac OS that allows for the user to switch back and forth between multiple (up to four) separate desktop screens.  This way they can have up to four different programs running simultaneously on different screens that can be cycled through at the touch of a combination of buttons (Command + Arrow key or number 1-4)

2.  NoRedInk – A grammar/spelling website where teachers can design grammar assignments and quizzes that are moderately personalized to the likes of the student.

With each day assigned, each group had to sum up the assigned day using a website called Storify.  It logged every activity, appropriate tweet, and video displayed that day.

Our group was tasked with creating a poem.  We selected the word “Creative” to make an Acrostic Poem.

Each group was tasked with evaluating different tools from the wiki:  CoolToolsforSchool.  We chose Drawing Tools.  Here’s our Wiki:

We were assigned the project about Understanding and how misconceptions shape our ideas and sense of understanding.  The topic we chose was on Rainbows.  We created a Weebly based upon the project.

Here is our Weebly on Somewhere Over the Rainbow!

Half ‘N’ Half’s project assignment was to create an Annotated Bibliography on the topic of:  Technology in Professional Development and Organizational Leadership.  We chose to create a Weebly on the topic.